This Is A Custom Widget

This Sliding Bar can be switched on or off in theme options, and can take any widget you throw at it or even fill it with your custom HTML Code. Its perfect for grabbing the attention of your viewers. Choose between 1, 2, 3 or 4 columns, set the background color, widget divider color, activate transparency, a top border or fully disable it on desktop and mobile.

This Is A Custom Widget

This Sliding Bar can be switched on or off in theme options, and can take any widget you throw at it or even fill it with your custom HTML Code. Its perfect for grabbing the attention of your viewers. Choose between 1, 2, 3 or 4 columns, set the background color, widget divider color, activate transparency, a top border or fully disable it on desktop and mobile.

Tunupa volcano is an semi extict volcano but it’s beauty lie on it’s Summit due it’s multicolored cráter that you can see on the top and of course the breathtaking view of the salt dessert is just something that only some people have seen, for this reason for people who love and admire nature, photography and adventure this is the perfect place.
Tunupa is one of our “Trekking Peaks” so it’s not necesary any equipment for this ascent, like most of this Trekking peaks (Uturuncu, Licancabur) there’s a car dirt road that’ll take us up to 4579 mts from there we start the ascent to the Summit at 5103 mts. This climb is a good way to getting acclimated, if you are interested in climbing any of the highest peaks like Acotango ,Parinacota, Pomerape, or the highest in Bolivia, The Sajama (6542mts) this itinerary it’s designed to be upgraded with the Sajama National Park tour.

Initially we are going to stop in the Train graveyard where you will see the first locomotives from late XIX century, then we’ll drive to Colchani, where you are going to see the rustic salt factories, if you want to buy a handicraft made of salt or textiles made of lama woolen, it is a good place where you could choose one, then get ready to see the wonderful Salar de Uyuni that has more than 12.000 square kilometers, into the salar you will visit the piles of salt (small pyramids that local people do to dry and then process the salt) next, you will see the Ojos del Salar (natural conduits that ends in holes through which circulate salt water) then, you will visit the first and only salt hotel into the salar (museum). After this you will go straight ahead to the Isla Incahuasi (Incahuasi Island) where we can see the giant cacti (3 mts) some of them have more than 300 years old, also we can see the rock formations of petrified coral, then we’ll drive to our nice luch spot in the middle of the salt flats, after lunch, we’ll find the perfect place to take pictures, the perspective on the salt flats allows us to take a lot of funny pictures, we’ll drive to Tahua a small town located at the foot of Tunupa Volcano where you’ll spend the night. 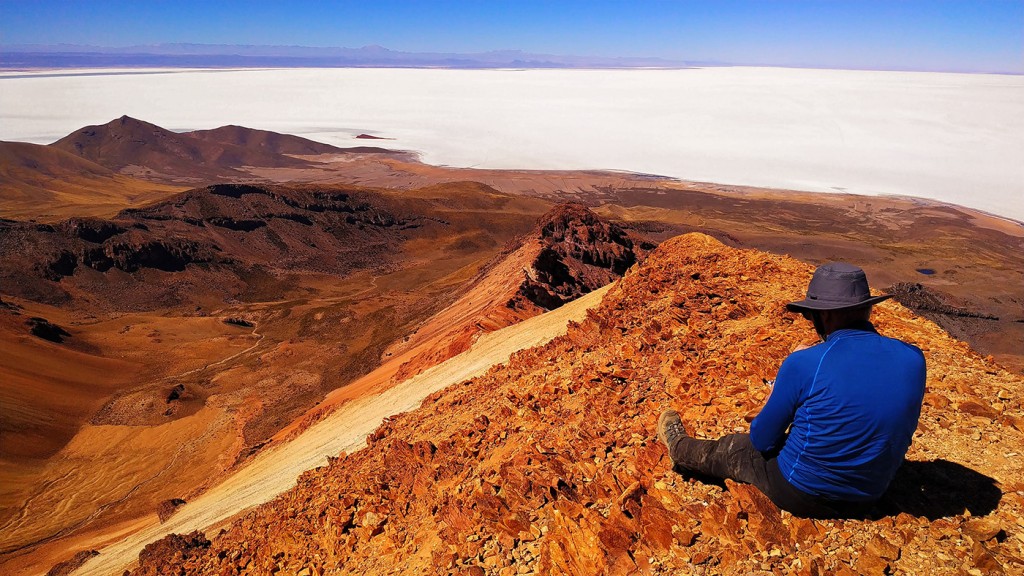 This day begins at 07:00 a.m. after breakfast we’ll drive upway until the proper slopes of Tunupa from there we’ll start walking up a trail counturing until we’l reach the ridge of rocky scree, from there we’ll aim to the Summit, on the way we’ll see the amazing surroundings, From there you can admire the beauty and vastness of a wonderful white desert, islands and surrounding mountains.
After a rewarding day we’ll drive to tahua to spend the night, after dinner we’ll have the chance to see the stars and diferent constelations from the salt flats and of course the sunset.

3th Day
Today we start visiting the village and museum of Chantani where we can learn about the culture of Quinoa which is cultivated on all the slopes of Tunupa, also in this place we’ll see the ancient mummies from preinca times, back on those days people use to “bury” their people on natural caves which were formed due the lava of Tunupa, the dryness of the salt made this place perfect for this purpose.
After this visit we’ll return straight to La Paz passing the “Jayu Kota” Crater and a couple of charming villages, including Pampa aullagas that is one of the many places some people think is Atlantis.

NOT INCLUDED
Tips.
Drinks.
Insurance of any kind.
Any expense due to a rescue operation (rescuers fee, transportation, or medical cost).